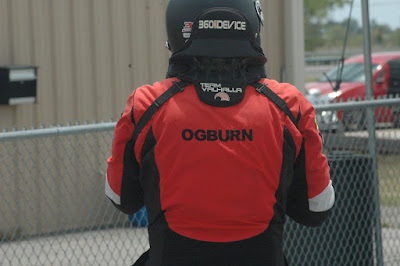 Getting Ready before Saturday's Feature Race

After getting into Katy at around midnight Thursday night, Ali and I pulled into the paddock Friday morning when the gate opened to unload my kart and equipment into 3G Kart Racing's nice tent setup. I ran out of fuel line in the shop so I had to properly install SRS Engine's new Hybrid Float Carb System to get it ready for testing in practice. After about an hour, I had the kart ready to go for the 10-minute controlled practice sessions. I was running on my races tires from the last SWRC race in Katy, and they were shot. My times were about 0.5s slower than my fastest lap from the previous race, but I was still able to tune the new carb and get it jetted properly for the hot and humid conditions in Katy. In my 2nd to last session, I bolted on some fresh sneakers and went out for some mock qualifying laps. The kart was tight and I was getting some front hopping occasionally mid-corner to exit so I adjusted the front camber, caster, and toe setting for Saturday's practice sessions.

Saturday morning, I ran on my practice tires from the day before and set my personal best lap time in the 2nd session at a 39.8. This was a 0.4s improvement over my previous best from the last SWRC round. The new fuel system along with better jetting allowed me to get a better pull out of the hairpins. I also improved my driving in several different areas around the track. Gulf Coast Kartway is a really fun 0.7 mile track with a good mix of technical corners that you have to link together properly for a quick lap time. We had 13 karts on the grid in the Stock Moto Shifter class and I lined up 10th for the Saturday Heat Race. I moved up to 9th in the Heat Race which sets the grid for the 16-lap feature race. In the near 100 degree and humid conditions, 16 laps can be quite tiring, but my stamina is improving with every race in the shifter. After a good start in the feature, I came across the line in 7th place after 16 laps. It was a very competitive field of racers mainly comprised of fast local drivers and 6 SKUSA Pro Tour drivers. Being only my first full season of shifter kart racing, I have quite the learning curve to catch the fastest Pro Tour drivers.

For Sunday, the conditions were similar and by the SWRC rules, we race on the same tires from Saturdays races. This adds a different element to the full weekend of racing as tire management is critical to performing well on Sunday. I improved my qualifying pace from the day before even on the used tires while the rest of the field slowed down around 0.5s so I closed the overall pace gap to the leaders. This tells me that I did not get enough pace out of new tires on Saturday which is something I will work on for the next SWRC race. I raced better in the Heat race on Sunday and moved up a spot at the start. Coming into Turn 2, I got into the back of Michael Jones' rear bumper which lifted my front tires off the ground and sent me off-track. This shuffled me to the back of the pack, but I was able to salvage a 7th place finish after passing 1 driver and then having several guys retire for mechanical issues. For the Sunday Feature race, I lined up 7th and had a rocket start moving up the inside line into 5th place by Turn 1. Coming out of Turn 3 on the opening lap, one driver flew into the grass and I was able to slot into 4th place. I held onto 4th place for a few laps, but dropped back a few positions as some of the faster drivers who got poor starts moved up through the field. I finished in 7th place again. I will work hard to improve my qualifying and race pace for next SWRC race so I can move closer to the championship leaders and fight for podium finishes.

Overall, I was pleased with my weekend of racing as I had no mechanical issues, I was able to tune the engine and chassis to help improve my pace, and I was lapping faster by several tenths every session compared to my last race in Katy. Thanks to 3G Kart Racing and SRS Engines for their help in getting my shifter kart faster and faster every race. The next SWRC round is at the Dallas Karting Complex in early October. This is a brand new track so it will be a steep learning curve for every driver in the field to tune the chassis and gearing for the new track.

Here is some onboard video and more pictures from the race weekend: 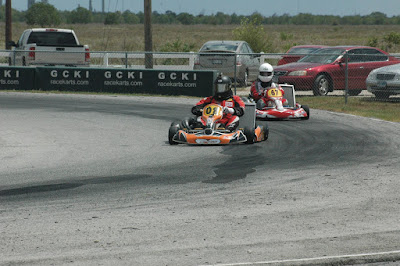 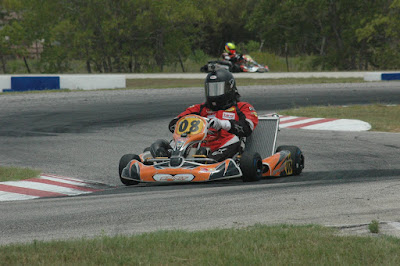 Apex of Turn 5 During Qualifying 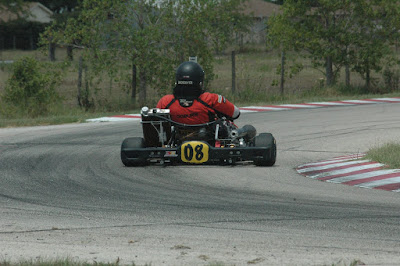 Foot to the floor, 2.5g's in Turn 6 during Qualifying