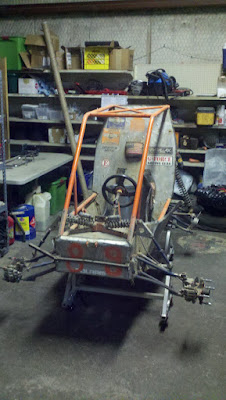 Got some rolling stands made for the Baja car. Now time to take it apart. The big hurdle will be getting longer half-shafts made. Can't wait to run this thing on the West Texas dirt trails!
Posted by Yaw Moment Racing at 11:22 PM No comments:

Shifter Kart Racing at Rimrock Raceway this past Sunday

This past Sunday, Joe, Stuart, Ali, and I trekked up to Midland, TX for a day of shifter kart and pitbike racing at Rimrock Raceway. The afternoon temperature was well above 100 degrees so we left at 6AM to get some early track time. Instead of just running practice laps, we decided to run our own race day. We started off with one practice session, then ran a 2-lap qualifying session and 4 5-lap heat races. We kept the races short to help keep our engines cool in the brutal West Texas heat. It was good practice for each of us as we all got faster around the 0.4 mile sprint track. Joe set the pace with a blazing 34.02 lap in qualifying. I reset my personal best around Rimrock with a 34.7 lap and Stuart was running competitively with high 34s lap times. The races helped each of us hone our passing and "not getting passed" skills as well as working on our standing starts.
In the heat races, I had good starts and was able to jump in the lead and win the first 2 races. In race 1, Joe and Stuart running 2nd and 3rd had some contact which sent Joe into a spin, but luckily everybody and their karts we unscathed. In Race 3, I got the lead at the start, but Joe got under me in Turn 2 on Lap 4. He slid up the track right after the pass and we both almost went off, but we kept going and had a good scrap for a few corners before I had a big slide trying to avoid contact and lost all of my momentum. Joe got the jump at the start of Race 4 and stayed their for the victory. 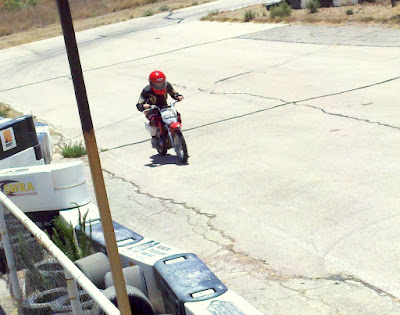 Ali on the Front Straight During our PitBike Challenge

After the we packed up the shifter karts, we had a fun lap-time battle in the pitbike and learned that I need to pick up the pace on 70cc race bikes! All in all, it was a fun day and we got out of Midland before the heat got unbearable. See below for some GoPro video action from the shifter kart races:
Posted by Yaw Moment Racing at 11:50 PM 2 comments:

I posted four videos to YouTube last week from the last two Southwest Regional Cup races including several qualifying laps and a rear view of one of the heat races from the NTK SWRC round. I embedded them below so enjoy!

Posted by Yaw Moment Racing at 9:09 AM No comments:

SWRC Round 5 and 6 at GCKI Recap

Joe, Stuart, Ali and I traveled to Katy, TX this past weekend for round 5 and 6 of the Southwest Regional Cup. This would be Joe and Stuart's first race in a shifter and a new track for me so there was lots to learn all around for our new karting team. The conditions in Katy were brutal for the race - intense sun, 95+ degree heat, and 50+ percent humidity all weekend. Fatigue and fitness were critical this weekend and it got tougher throughout the weekend. For this weekend, I was under the tent with 3G Kart Racing for Friday practice, Round 5 on Saturday, and Round 6 on Sunday.
We got in late Thursday night to our hotel in Katy and had a frustrating "extended wait" for someone to check us in at 1AM, but we made it safe and sound to the track Friday morning with 3 shifter karts stuffed into my 6x12 trailer. My goal for Friday was to learn the new track, get a decent base setup for the weekend, and run at least one 40s laps. I had watched several onboard videos from previous races coupled with going over my AIM data and having karting expert Dallas Patterson watching me in several different corners, I was able to get comfortable with the new track fairly quickly. After 5 sessions, I was running comfortably in the 40s range with a tight, but driveable setup.
For Saturday, I switched to softer axle which freed the kart up and allowed me to get quicker as the track rubbered in. For qualifying, I ran a 40.1 which put me in 8th position for the heat race. In the heat race, there was some attrition in the first few laps which helped me move into 7th place despite pulling off after 4 laps. On Lap 3, Jim Garvin tried to get under me in Turn 9 and I turned in before seeing him under me so we got together damaging his steering and bending my axle. I lined up on the grid in P7 for the 16 lap feature race. I got a great start moving up to 4th place as Jordon Musser and Chris Jennings made contact slowing both karts. During the race, I moved back two positions and came home in 6th place.
For Sunday, I tried to limit my practice laps to avoid fatigue at the end of the day. With a 10:30 AM start for qualifying, the feature race would be during the heat of the afternoon and I wanted to be fresh for a 16 lap battle. After 1 practice session, I removed the front bar to soften the kart overall and reduce the tightness and hopping I was getting in Turn 1 and Turn 4. This helped for qualifying and I ran a 40.4 which put me 7th on the grid for the heat race. I had a terrible start in the heat race as I let the clutch completely out to early and bogged in 1st gear. Once I got up through the gears on main straight I had dropped back into the middle of the Stock Moto Masters (S4) class field which started behind the Senior Stock Moto (S2) drivers. I finished the heat in P8 which is where I would start the feature race. At the start of Sunday's 16 lap feature race, I had a quick start and moved into P7 where I would stay for the remainder of the race. However, my overall race pace was improved over Saturday and I was able to run mid-40s laps all day and actually ran my 2nd fastest lap on lap 15 which bodes well for my fitness in long, hot summer races in the shifter.
I have a two month break for the next SWRC race which is back at Gulf Coast Kartway on August 13 and 14th. I may run a few club races at North Texas Kartway in between to keep practicing, but we shall see what the budget allows.
Here is some onboard video from the weekend:
Saturday Qualifying Lap
Posted by Yaw Moment Racing at 9:52 PM 1 comment:

I am racing in the Southwest Regional Cup Rounds 5 & 6 this weekend at Gulf Coast Kartway (GCKI) in Katy, TX. GCKI is a 12-turn 0.6mi sprint track outside of Houston. This will be my first time racing here so tomorrow's practice sessions will be very important. Being near Houston, it is sure to be hot and humid all weekend so racing conditions will be tough.

Joe and Stuart are making the trek with me to Houston for their first race in a shifter kart so it should be a fun weekend.
Posted by Yaw Moment Racing at 9:01 AM No comments: