Quad Rotor Ridiculousness....Turn up the Volume!

Posted by Yaw Moment Racing at 6:50 AM No comments:

Looking to get some of your friends involved with autocross, then this is a great place to start: www.sccastartingline.com/

The Starting Line is a one stop shop for diving into the sport of autocrossing: 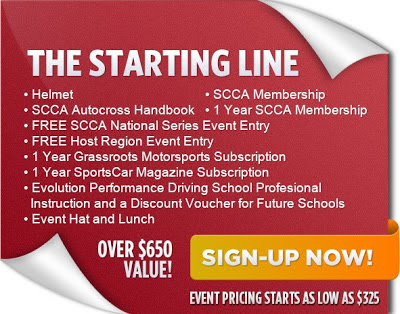 Posted by Yaw Moment Racing at 12:10 AM No comments:


Through one of the Texas autocross clubs, I found out about an incredible opportunity to drive the Circuit of the Americas for FREE just a few weeks after the inaugural F1 race at the track. The event was a ride and drive event called the V-Series Performance Lab put on by Cadillac and gives prospective buyers the chance to sample Cadillac CTS-Vs around full-size racing tracks. I went with a group of co-workers back on December 9th of last year to Austin for the event and we had an absolute blast. After a too-late-night on 6th street, we ventured to the track bright and early to start our free COTA experience.

We were  greeted by free breakfast and the typical ploy used to snare in car guys (hot girls in Caddy shirts...) followed by intro presentations by a Cadillac test driver and Andy Pilgrim. The 150-or-so attendees were broken into the three "modules" - filmed laps in CTS-V coupes, autocross-type elements in a Cadillac ATS, and more hot laps in a CTS-V Wagon or Sedan. The CTS-V coupe laps were filmed with a RaceLogic Video VBOX system and my video is embedded below. For the filmed laps, I drove a CTS-V Coupe with an automatic transmission. We had to run with stability and traction control on but it was still plenty fun...and safer for the brave instructors. For my final module, I had more laps in what was supposed to be a CTS-V Wagon or Sedan, but ended up being a CTS-V Coupe manual which my instructor found for me. The manual gearbox made it even more fun as it allowed for much more control of the torque coming out of each corner (the auto gear selection was more of a guessing game). During my driving session, I found out my instructor was Matt Varsha, former Grand-Am race driver and son of SPEED broadcaster Bob Varsha. He had some great stories and I really enjoyed getting to meet him.

Here are some more pictures from the event:

Here is the in-car video of my hot laps in the Coupe:

*We had to lift at the top of the hill on the back straight
Posted by Yaw Moment Racing at 12:31 AM No comments: The United States Grand Prix at the Circuit of the Americas is something for American racing fans to be proud of. After the embarrassment that was USF1, the USA is back on the F1 map in a big way and I am very happy I was able attend the inaugural USGP at COTA. The weather was great and we couldn't have asked for a more perfect weekend with family and friends.

First off, the track is immaculate - great elevation change, exciting layout, and the signature Turn 1. The permanent stands and pit-lane buildings are spectacular; it was great to see a track like this on American soil.  We sat in the Turn 5 bleachers which were at the end of the esses section. We had a great view of the cars exiting the downhill Turn 2 and then charging up to the esses at 180+ mph. The cars only disappeared from view as they entered Turn 6. I really only have two complaints from the weekend - not enough food vendors (long hot dog lines) and the temporary bleachers setup in Turn 5 and other areas around the track are very uncomfortable for a 2 hour race. That is literally all I would change, after all of the traffic worries, skepticism about the track layout and predicted lack of passing, the race organizers and track officials did a great job. All of the COTA personnel were very friendly and gave everybody a nice "Texas Welcome." Each trip to and from the track was very easy with virtually no traffic. The only delay was right after the race when I had to wait in line for about 45 minutes to an hour for our shuttle. After the ten minute ride to the lot, we hit no traffic and drove straight home. Not bad for 120,000 people leaving the track at the same time after the first race. With 1 year of practice under their belts, next year's USGP is going to be fantastic.

Here is the few from our seats from FP2:

Here are some more photos from the F1 weekend (the good ones were taken by my Dad):


In November, the 2012 SCCA Solo Nationals official results book and SportsCar Magazine's annual feature on the Solo Nationals showed up in the mail. Finishing 3rd in ESP, I got a mention on our class's writeup. I've got a lot of work to do to make up the 1.2s to Mark Madarash, but racing wouldn't be fun if it was easy!


Posted by Yaw Moment Racing at 7:51 AM No comments:

Life has been busy lately. This has been what has consumed most of my time:

Ali and I have been in our new house for about 10 days now and of course it's still full of boxes....but liveable. Our friend and home-builder Gary Floyd Homes did an amazing job and we couldn't be happier. We snapped these photos last Friday when it ACTUALLY snowed in San Angelo. We probably won't see our house like this again for quite a while.

We now have internet setup at the new house, so it is now time to get back to running the blog and prepping for the 2013 racing season. I have a backlog of posts I've been meaning to make so I'll be posting some tardy photos and video from the F1 race at COTA, a Cadillac driving event I did at COTA, some indoor karting, and plans for the 2013 racing season. I'll also be posting up some more pictures and details about my new race shop soon.

Posted by Yaw Moment Racing at 6:06 AM No comments: