Well, here is the video, this explains for the situation better than I can:

I'm a little bit delayed making this post, but life has been quite busy lately with work and finishing our wedding/honeymoon plans. I autocrossed with Equipe Rapide on March 25th in Mesquite, TX. This was the 2nd Challenge Cup autocross on Equipe Rapide's schedule. As with Challenge Cup # 1, the event was run in the small lots of Resistol Arena. Fast run times were in the 30s range, but unfortunately, I was not able to post a competitive time due to breaking teeth on my ring and pinion gear on my second run. As you can see in the video, I downshifted to 1st gear in a slow hairpin. On the corner exit, when I upshifted 2nd gear, the ring gear broke which invoked some non-so-pleasant noises from the rear end. I had no trouble with the downshift or upshift, so the failure was quite a surprise. 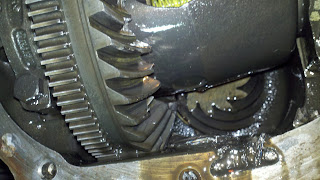 I have a spare GM ring and pinion so I have the parts needed to fix the car (thanks Sam!). The car is up on jackstands and I am in the process of pulling the rear end apart. Hopefully, the car will be driveable again soon.
Posted by Yaw Moment Racing at 3:14 AM 2 comments:

Here is a quick compilation video from the Texas National Tour put together by Solo Matters. I didn't make the video unfortunately.....maybe next year!
Posted by Yaw Moment Racing at 8:01 PM No comments:

Joe, Stuart, and I were in the shop last night prepping our karts for testing this weekend at Rimrock Raceway in Midland, TX. After getting them fired after a long off-season, we decided to make sure everything was working properly with some good old fashioned donuts.
We are running up to Rimrock Raceway on Friday for a full test day and some practice races. Rimrock will be our home track for the weekend and we'll start running races there starting in June. Joe and I both have our GoPro HD cameras so we should have some onboard action from the testing. It will be good to get back to the kart track!
Posted by Yaw Moment Racing at 10:02 PM No comments: