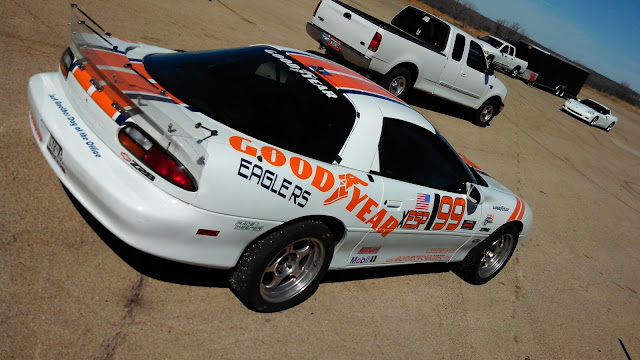 Last weekend, my parents met me in lovely Mineral Wells, Texas for two days of autocross fun in the Camaro. We planned on using the weekend to get my Dad seat time in the car away from National-event stress while trying to setup our new Race Technology DL1/Video4 package and try out some different suspension settings. On Saturday, we raced with the Lone Star Chapter of the BMWCCA. We had about 30 cars (mainly BMWs) on a cold Texas morning and the BMW setup an ambitious, long and high-speed course. Each driver got 10 runs (5 in the AM and 5 in the afternoon). We rode together for each run except for our final run which we used as a flyer for the timesheets. I ran a 86.256 on my final run which gave me FTD and the win in Z-class. 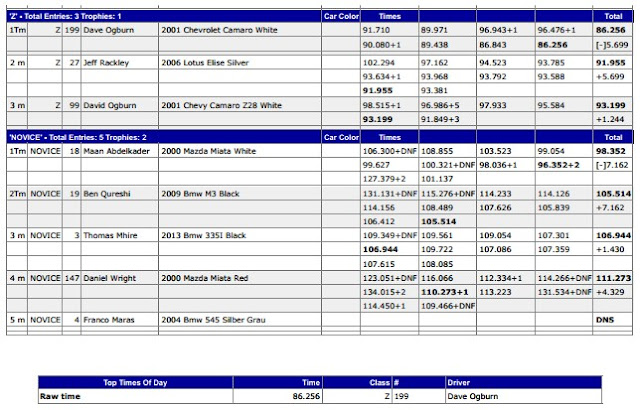 On Sunday, we headed back to the Mineral Wells Airport bright and early to help setup the day's autocross course. My Dad and I both ran in X-class which is their PAX-based class for experienced drivers. Out of the 12 drivers, there were quite a few National Championships and many Solo Nationals trophies so the competition was about as tough as it gets for local autocross. Similar to the BMW club, we got 4 runs in the morning and 4 runs after the lunch break. During lunch, I made a change to the rear ARB setting and really like the balance at the end of the day. It was difficult to tune during the heats because we were running very frequently with a two-driver car and fairly small heats.

I finished with a best time of 52.956 which put me in P5 in X-class and 5th overall in PAX. Unfortunately, I hit the last cone on the course on my final run which was a 52.461 and would have put in 3rd overall and only 0.2s back from Mark Madarash who won X-class in his venerable '88 Trans Am. Overall, the weekend was  a great start to the season and I had a blast racing with my parents. We continue to make progress with the ESP Camaro and that makes for exciting racing.

Video from my fastest run: