Back in Lincoln, NE for the 2012 SCCA Solo Spring Nationals 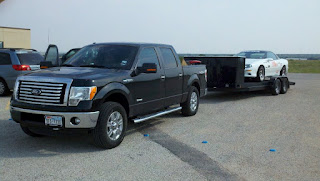 Ali and I arrived in Lincoln, Nebraska today for the 2012 SCCA Solo Spring Nationals. This event is becoming the largest National Tour and Pro Solo event of the year behind the Solo Nationals and Pro Finale in September. There are 370 entries for the National Tour event which takes place on Sunday and Monday of this weekend. My Dad and I are competing in E Street Prepared class which currently sits at 17 entries making it the second largest class of the event. Big horsepower and wide tires....what's not to like?

After getting settled in this afternoon, my Dad and I run a test and tune event with Junior Johnson and Sam Strano which was put on by the Evolution Performance Driving School. My pace relative to multi-time National Champions in my car was good, but the pace of the car overall was slower than expected. However, Lane Borg, my Dad and I spent a few hours and over 30 runs on our Goodyear Eagle RS tires and we able to make some solid improvement to the ESP Camaro's pace. Test n' tune courses can be deceiving so we won't really know where we stack up until tomorrow's first runs.
Posted by Yaw Moment Racing at 11:34 PM