Dave Ogburn in the #178 STX Mini JCW takes 2nd in class, 3rd overall in PAX, and 8th overall in raw time over the 2-day competition at the Danville Airport in Southern Virginia. 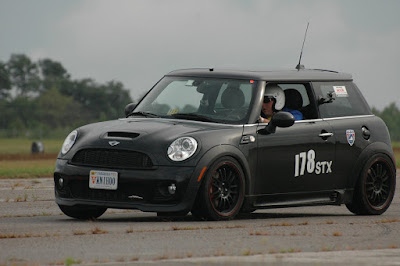 Between the two days, there were approximately 70 entries at the 2010 Commonwealth Games Autocross. STX represented the biggest class with 8 competitors on Saturday and 9 on Sunday. My biggest competition was Chike Dellimore and Gary Krichbaum running a Silver Mazda RX-8 and Chris Cline and Eric Sienkiewicz in their winged, black BMW 325. Chike and Gary beat me pretty badly (4 seconds over the 2 days) at the NeDiv Solo Championship back over Memorial Day when we were very under-prepped due to suspension parts not arriving in time. I was looking at them as a barometer for our improvement now that we the KW dampers, KW springs, and ARBs installed on the car. Chris Cline and Eric S. have won every national tour they've entered this year and have won 9 national events over the past 3 years. I was looking at this car to help me judge our progress and see how competitive we might be at the Solo Nationals this year. Given that this was only my second time in the car and first time driving the modified suspension, I was hoping to be close to Chike and within 2 seconds of Chris/Eric in the Bimmer.

It rained throughout the day on Saturday which helped me against my RWD competition. We ran in the 4th heat which proved to fortunate because the track began to dry during our session causing each run to be critical as the track got faster and faster. Chris Cline set the fast time with a 54.5 to my 55.0 and Chike's 55.9. Unfortunately, Chike and I both nailed cones on our fast runs which kept us in 2nd and 3rd but dropped us two seconds behind Cline. There was time for a few "fun runs" after the 4th heat so I signed up to get more seat time in the car. I ran a 54.0, 54.2, and 54.5 on my three runs which would have beaten Chris and given me 1st in STX, FTD, and FTP. This weekend, I was not really worried about cones and where I finished. My biggest concern was raw time in comparison with the Black BMW drivers and Chike's RX-8. Looking at this way, I was super happy with the pace we had on Saturday. Beating Chike by almost a second after getting waxed by 2 seconds per run back at the NeDiv Solo Championship, finishing 0.5s behind a National Tour winner, and running FTD in the extra runs told me that our Mini has good pace and with more seat time and tuning we can be nationally competitive.

On Sunday, Eric Sienkiewicz joined the party in STX. He is generally faster than Chris in the BMW, but they are both very quick drivers. Sunday was all dry, so no more wet advantage for our FWD Mini. I finished 3rd in STX on Sunday with a 53.8 behind Chris' 53.2 and Eric's 53.6. Chike clocked in with a 54.0. Eric's fast run was with a cone so he fast raw time was a blistering 51.6. I think that this was the true pace of their BMW and tells me that we still have a long way to go compete for the STX National Championship.

Even with my coning away my fast run on Saturday, I finished 2nd in STX, 3rd in PAX, and 8th in raw time. If you take away the cone (just for kicks), it would move me to 2nd in PAX and 5th in raw time. Overall, I was very pleased with the way the car performed and the way the weekend turned out. The new suspension was a massive improvement. Steering response and front grip was excellent with very little understeer all day. The rear-end rotated nicely with trail brake and breathing off the throttle at the turn-in of the slalom and transitions.

The rest of the results can be found here: www.brr-scca.org/

Thanks to my good friend Mike Bobbitt who came up from Charlotte to hang out. Mike and I were partners on the Rusty Hood Racing LeMons team and hadn't seen each other since we both quit Honda. Our next event is the Virginia Autocross Championships at the ACU-4 military base in Norfolk, VA on August 21 and 22. This site is concrete so will be very important for tuning our Mini for the concrete in Lincoln Solo Nationals.