I ran my first race in the shifter kart on May 22nd and 23rd. As I posted earlier, the race was a charity event for Kali's Cure (a group raising money for spinal cord injury research) and took place at North Texas Kartway. My weekend certainly had its ups and downs, but I managed to improve my times around NTK and learn more about shifter kart racing. I went into the weekend looking at it as mainly practice with not much of a chance of being competitive considering everybody I was racing against had been racing shifters at NTK for atleast a year.

Here is a quick summary of the weekend:

Bad
1) I missed qualifying, the Pre-Final, and the Final on Saturday with brake issues. After the 2nd practice session on Saturday, both master cylinders seized. After finally finding the issue, I rebuilt both MCs, but only had one rebuild kit which meant I had to turn down one of the MC plungers with emory cloth to make it fit back in the master cylinder.

2) I missed the pre-final on Sunday because my engine flooded on the kart stand and I could not get it re-fired. After fixing the issue, I was ready and looking forward to Sunday's 16-lap final until my shift lever came unbolted on Lap 1. I was able to continue running until Lap 3 when I was no longer able to downshift because the shifter lever was so far off-axis.

2) I fixed a lot of nagging problems with my new kart, was able to learn more about its strengths and weaknesses, and made good contacts with kart shops in Texas.

Well, that about sums it up. It was very frustrating to miss tracktime, but I like to look at the bright-side which is me getting faster and learning. I'm tired of these small issues keeping me off-track to the kart is getting a complete inspection and overhaul before the next race.

Here are a few photos: 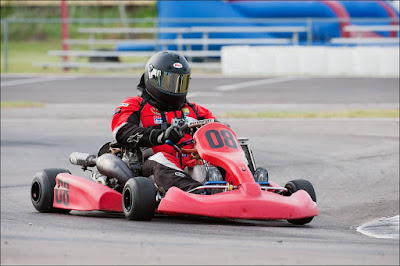 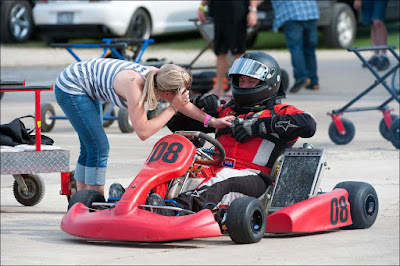 Posted by Yaw Moment Racing at 8:02 AM