I made the trek to Mid-Ohio to be the race engineer for Euro Motor Racing for the June 19th Conti Challenge Race. For the first time in team history, we had a pro driver in the seat with team owner Terry Heat so we had high hopes for the weekend. After working with Bryan throughout the weekend, I can say I was thoroughly impressed with his driver coaching, quickness, teamwork, and attitude. Terry was a competitive CTSCC driver before, but Bryan still managed to improve his fast lap at Mid-Ohio by 1.5s. Our fast lap from 2009 was a 1:36.2 and Terry qualified this year with a 1:34.005 to qualify in our best starting position yet, P9 out of the 32 car GS field. In Grand-Am, the driver who qualifies must start the race. Our basic strategy was to run a 2-stop race getting Bryan in the car within the first 40 minutes of the 2.5 hour race and then making a splash n' go pit stop later in the race.

Terry had a great opening stint picking up 1 spot at the start and moving up to P6 by lap 20 when we caught a yellow and made our 1st pit stop. Bryan hopped in the car after we dropped back to P19 due to the pit stop and immediately started charging through the field. We were back up to P10 by lap 35 and were the quickest car on track, but things started to go wrong on lap 38 when the yellow flag flew. Our pit window opened up on Lap 47 so we decided not to make our 2nd pit stop because we didn't want to gamble on yellows later in the race. This proved to be a mistake because all of the leaders made pit stops and ended up getting the yellows to make it to the end on fuel. However, this moved us to P1 where we stayed for the next 10 laps. Bryan continued to be fast and we had a 7 second lead on the field before we made our 2nd pit stop under yellow on lap 49. After the stop, we rejoined the field in P17. After we worked our way back up to P11 in a few laps, 4th gear in the transmission broke and this killed our progress. We struggled for the rest of the race with 3rd to 5th shifts and brought it home in 12th place.

While 12th place is still in the money and not bad considering we lost 4th gear in the middle of the race, the finish was very disappointing. We had the car, driver, and team to finish on the podium had we made the right strategy call on lap 40 and had the transmission stayed together. Hey at least we did bring home fast race lap and new track record with a 1:33.274!

Here are a few photos of the 07 from the race courtesy of ColdTrackDays.com: 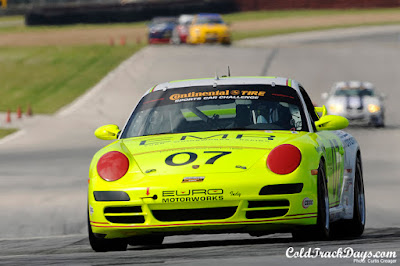 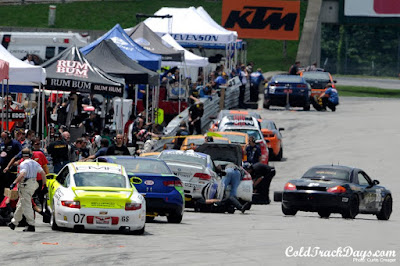 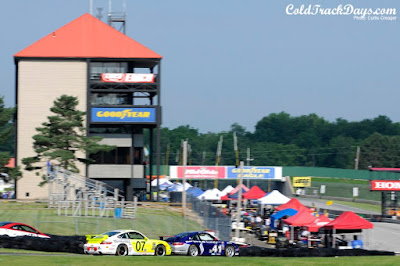