Oh man, it's been a while since my last post. I went on vacation two weeks ago and haven't had an Internet connection all last week since I am moving (not far, I'm still in Columbus). As always, there has still been plenty of time to race.

Team Cardiosport competed in the June 21st Mid-Ohio round of the Koni Sports Car Challenge. With drivers from Lexington, KY and Indianapolis, this is our best track and we had high hopes for out 1st top 10 finish in GS class. We had a disappointing qualifying and only managed to start P14 out of the 21 car field. Driver Terry Heath went out on stickers for qualifying but a miscalculation on tire pressures made the car treacherous to drive after 3-4 laps. We were 1 second of our pace in practice with old tires on the car. The team decided not to gamble and go for a safe 2-stops strategy for Saturday's race especially with the small field taking the grid. The race started out very well as we moved up to 8th place by the 12 lap, but things went south quickly. Terry tagged the right rear of the #52 Mustang in the Carousel which punctured the left front radiator and ended our day. It was a very disappointing end to a promising race, but we will back in action at Barber Motorsports Park on July 21. 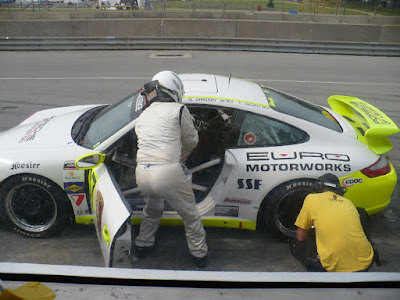 On June 27th, I ran my first Saturday night kart race with the Mid-State Ohio Kart Club. Heat Races started at 5 after two VERY hot and greasy afternoon practice sessions. I started 3rd and finished 3rd in the first heat race. I got hit hard in the rear directly before I was passed by Matt Milless so I had some bumper repair to do between the heats. I started P9 in the 12 kart field in Heat 2, but I had a poor start dropping me back to 10th on the 1st lap. I moved back up to 9th when I dropped a wheel off of the curbing on the exit of the high-speed Turn 5 and, in an instant, I was facing backward looking at the kart behind me. I pulled my kart safely off track and inspected the damage which turned out to only be a bent sprocket. With my 3rd and 12th place finishes, I started 5th for the feature which started at 9:30 under the lights. Only the corners are well-let so it very difficult to judge braking zones, etc. when you are coming in and out of the light. I went the wrong direction with my tire pressure adjustment which resulted in an incredibly tight kart. I had nothing coming out of the corners and it killed my lap times which were 1 sec. slower than in the previous heat. However, a few incidents behind me kept the pressure off and I was able to cruise home in 5th place.

Sorry, no pictures from this race. I was by lonesome for this race which makes it difficult to take picture of me racing and I was having a few technical difficulties with my GoPro. I have a busy couple of weeks ahead with the Koni Challenge race at Barber Motorsports Park in Alabama, followed by an MSOKC kart race and then the Commercial Point Grand Prix which is an annual karting street race about 30 minutes from my house. Go to www.cpgp.com for more.
Posted by Yaw Moment Racing at 10:49 PM