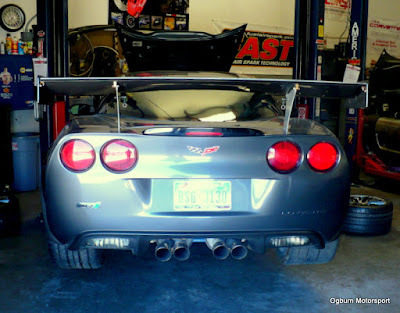 LG Motorsports ZR1 Hillclimb Racecar
I saw this beast on a lift in the LG Motorsports shop when I dynoed the Camaro last weekend. After talking to one of the LG employees, I looked up the YouTube video of their ZR1 with Lou Gigliotti driving the Spectre 341 Challenge hillclimb in Nevada. The video is pretty impressive especially since this course is known as a widowmaker...check it out below.

This looks like an awesome event. Growing up on the East Coast, I became a big fan of hillclimbing and really wanted to race our Crossle Formula Ford on some of the famouns Pennsylvania and North Carolina hillclimb runs. I never got the chance so I think I just added a new race to my bucket list with the extra goal of making this elite club - 3:41 Club. I think the ESP Camaro with some sticky Goodyear DOT tires could do it....
Posted by Yaw Moment Racing at 9:26 AM