I travelled to Dallas again on November 13th and 14th to race in the final NTK kart race of the 2010 season. I ran 56 practice laps on Saturday in preparation for Sunday's race and it really paid off. The kart worked flawlessly which helped me to focus on tuning the kart and working on my shifter kart piloting. My fast lap at NTK before this weekend was a 39.22 which is a few seconds off the pace. The experienced NTK shifter kart drivers can lap NTK in the low 36 second range. These drivers like Nick Lucido, Jordan Musser, and Jake French are some of the top shifter kart drivers in the country so I have a lot to work up to. My goal for the weekend was to be able to run consistently in the 37s. I almost achieved my goal on Saturday and was able to click of a 38.14s lap with my 5 fastest laps all within a tenth. These time are still off the pace, but at least progress is being made. Thanks to Ali's Dad for making the trip out to Denton to take some photos. Here are a few photos from Saturday (credit - Charles Rutherford): 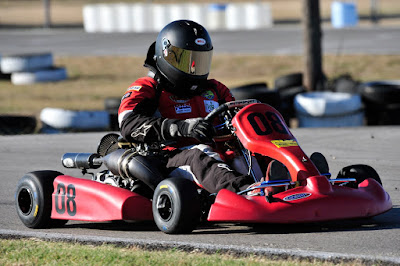 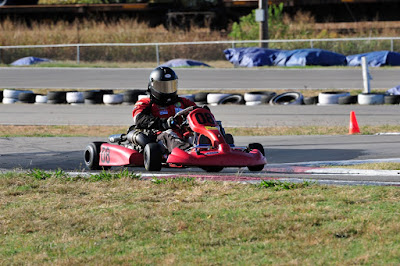 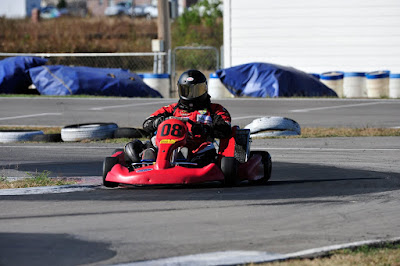 After Saturday's practice, we made the hour trek back to Denton for the last race of NTK's Fall race series. This was my 2nd race in the shifter kart and the first one with the kart working properly so I had high hopes of really improving my competitiveness in the new kart against the experienced NTK drivers. It was a sunny cool day with temperatures around 60 degrees. This made for treacherous conditions on the opening laps of each session until the tires came up to temperature. I started out with a 37.90s lap in the first practice which achieved my lap time goal for the weekend. I adjusted the seat rail and rear bar for the next two sessions trying to find some more rear grip, but ended up running exactly a 37.90 in the 2nd practice and in qualifying. If you can't make progress, at least you can be super consistent...
My 37.90 lap put me in 4th spot out of 6 shifters for the heat race with Andrew Perkins leading the way with a 36.2s lap. I bogged on the standing start as the P5 shifter kart rocketed past me into Turn 1. I knew from qualifying that I could run about 1 sec. faster than him so I needed to move back into P4 quickly to have any shot of keeping up with the top 3 karts. I made the move on the front straight and was able to duck into 4th place in Turn 6. After the poor start and getting passed, I had dropped about 5s back from P3, but was slowly reeling him in for the first 4 laps of the 8 lap race. My progress stopped on Lap 4 when I bicycled badly exiting Turn 8 leading on the front straight. I counter-steered sharply as I went up on two-wheels to avoid flipping, but had an off-track excursion as a result. I managed to hold onto 4th place as I merged back on track and stayed there for the final 4 laps. This put me 4th on the grid again for the 12-lap feature race. By this point, the sun was setting and the track was cooling off dramatically. We ran under the lights so after a quick setup change and visor swap, I was ready to go. I got a better start, but the P5 kart was able to dive under me in Turn 2. After the first lap, my water temperature climbed to above 140 degrees telling me I had covered too much of my radiator to compensate for the cooler temperatures. Pulling off radiator tape while steering, shifting, and trying to pass another kart is difficult. After two failed attempts, I took back 4th place on lap three in the same spot as the heat race. By this point, the top 3 had stretched out a sizable lead and I was not able catch up so I cruised home to a 4th place finish.
Overall it was a fun weekend and I made a lot of progress with my shifter. I have figured out a lot of the small problems that have been plaguing me and feel much more comfortable working on and driver the shifter. Now that I have a good baseline set, time to get to work on getting down to the 36s.
Here is a compilation of onboard footage from Sunday's race:
Posted by Yaw Moment Racing at 10:23 PM