Team Yaw Moment Racing had two goals for the weekend: 1) Avoid the rain and 2) Run every lap of the weekend incident free. I did not want a repeat of the first race and come home with 0 championship points after two races. Both goals were achieved this weekend. 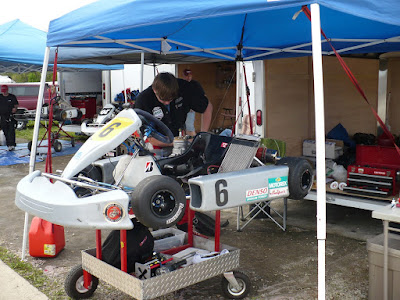 We ran Circleville backwards (clockwise) this weekend which basically meant all my practice and testing in the offseason running counter-clockwise went out the window. I have only run this configuration once about 7 months ago so I was a bit rusty. The track was still wet in places for the first practice so it was difficult to put the power down coming out of the corners without a nice powerslide. The 2nd practice was uneventful as I used the 5 laps to re-familiarize myself with the clockwise racing line and braking zones.

The starting order for Heat 1 was randomly assigned and I started in P1. I was a little nervous to be leading the field into Turn 1 with 3 or 4 faster drivers following me, but we all made it through unscathed. On the 2nd lap, Bo Strawser made the pass for 1st place in turn 2 and never looked back. I held the rest of the field off for the next three laps. Racing into the hairpin at 63 mph after the back straight at Circleville, the 3rd place racer bump-drafted me NASCAR-style in the braking zone. It forced me wide in the hairpin but I stayed on track. Three karts passed me in the process though dropping me to 5th place out of 8. I finished 0.2 seconds behind 4th place after rough driving between P3 and P4 caused a near spin for the P4 driver, but I couldn't make the pass before the finish line. 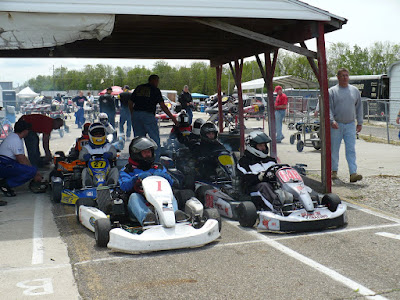 Starting P1 for the 1st heat means starting in the back for Heat 2 when the field is flipped. Heat 2 was a very clean race with mainly single-file racing. I moved up to 6th place after a stuck throttle and black flag sidelined the 6th and 7th place starters. I really started to notice my lack of pace in this heat as I struggled to keep up with the 5th place racer. After a few laps, the kart was really sluggish out of the corners and it felt as if the axle was binding on corner exit. A problem in the braking system is causing my rear caliper to hang on the rotor after the kart heats up. I'm thinking either water/junk in the brake lines is expanding and preloading the caliper pistons or faulty caliper seals are causing the pistons to not return. With this holding me back and a lack of experience in this configuration, I could only muster a 6th place finish in Heat 2.

I started 6th for the Feature Race, but, man, it was a boring race. There was not a single racing pass during the 10-lap race. Each person gapped the surrounding karters and no one made a mistake except for Angel Wilkinson going off track while in 4th place and losing her chain. With her mishap, I came home safely in 5th place out of 8 and survived the weekend with no big parts bills! I posted a helmet cam video of the feature race below. Next time I will take video for the heat races and the feature because the heat races are generally more exciting. I'll post the most entertaining race to watch.

YMR's next race is a week from yesterday at Circleville Raceway Park running CCW. This will be the 3rd points race of the year for the Midstate Ohio Kart Club and an important race for me to pick up the pace and start bringing home better finishes!