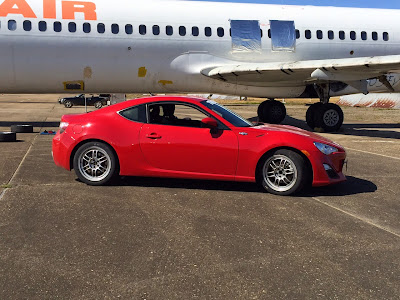 Two weeks ago (a bit delayed on this post....), we kicked off our 2015 ProSolo season in the C-Street Scion FR-S. I had some new suspension bits to try out for this race as I installed the newly-discovered TRD springs and ARBs that are port-installed options for the FR-S. It would also be my first time driving the FR-S to an event...and I picked a 1,600mi round-trip journey to try it out....


We had consistent dry weather throughout the weekend so it was a clean battle in the 12-car C-Street class. I started off the first heat in 2nd place with a not-so-great 0.7s margin to Chris Harvey and his 2009 MX-5. The tire sizes that we tested and decided on at the practice course the day before did not translate to the transitions-heavy ProSolo course. The car was very out-of-phase and imbalanced in slaloms especially. I decided to go back to the tire size I ran in College Station and go up in overall damping to account for the stiffer roll rates from the TRD parts. It was instantly much much better and I moved into 1st place after the 2nd heat. On Sunday, I had my work cut out for me as Chris Harvey immediately chopped off large chunks of time to take the lead by about 0.5s before the final runs. I dropped in a 45.8s on my last left side run which brought me to within one tenth of the lead but still in 2nd. On the last run, I need to improve on my 46.082 right-side run to win. I came in with a 45.846 and was able to take the win by 0.161s! It was a very tight battle that I fully expect will continue throughout the year.

On to the Challenges and the highlight of the weekend which was my Dad getting picked for the Bonus Challenge and then marching through to take the win! He drove great and the extra seat time I think really helped to "seal" the improvements he made over the weekend. My attempt at the Super Challenge ended in the first round unfortunately. On to the Spring Nationals in Lincoln over Memorial Day! 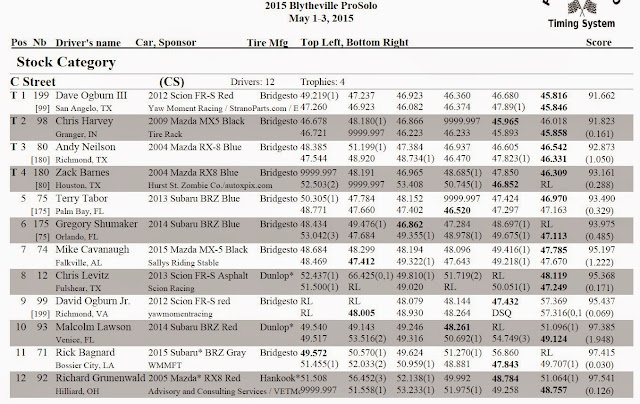 
Thanks to Yaw Moment Racing's partners: