My Dad and I kicked off the National SCCA autocross season with a fairly last minute decision to attend the Blytheville ProSolo on the weekend of March 22nd and 23rd. With us not being able to attend Spring Nationals this year, we needed another ProSolo event to qualify for the Pro Finale in September. We arrived at Midnight Friday in Blytheville looking forward to mid-40s temperatures and strong winds all weekend. Luckily, the rain we did get didn't affect the on-track action as we had decent track conditions in all three heats.

I put in some work in on the ESP Camaro before the event.....thanks to Josh Pu'u for the help in the shop!

We were 10 deep in ESP which is a big improvement over Blytheville turnouts in recent years. Overall, the event was a huge success. I picked up my first ProSolo class win and my Dad earned his first trophy at a National SCCA event. The car was working great and the courses suited our Camaro as it was fairly high speed for a ProSolo event - more like a Tour course. We made some minor setup changes to the car over the winter and it worked very well. The car has never felt better I'm happy to report. The bummer for the weekend was Jadrice's great looking Boss Mustang having clutch issues with ended his event after two runs. The event may have very gone differently for the Ogburns with Jadrice still in the field. 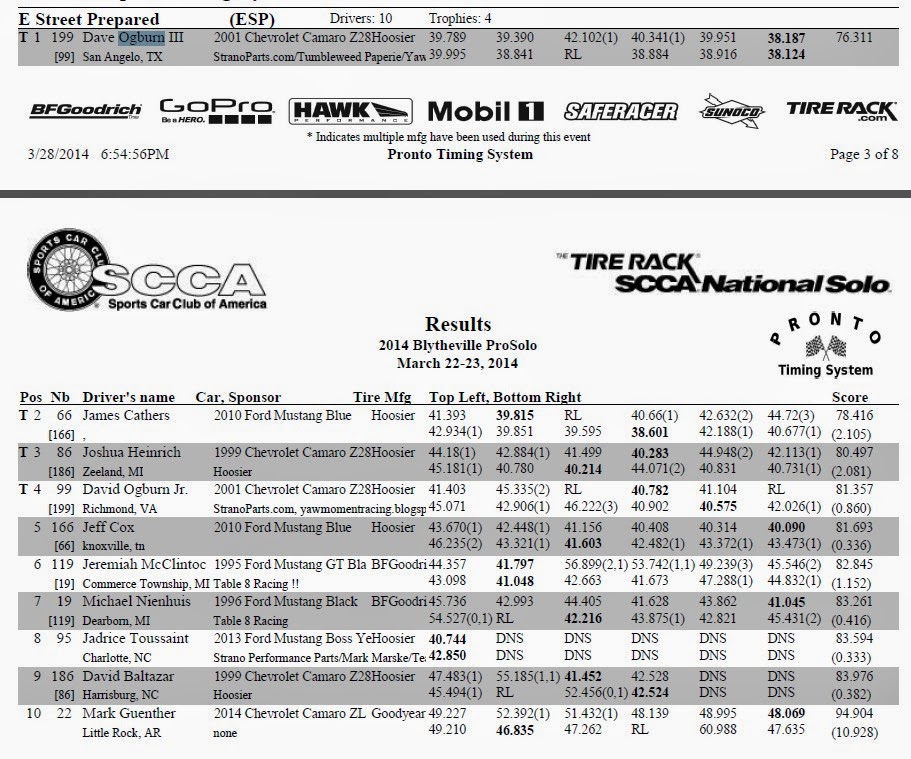 With my win in ESP, I made my first ProSolo Super Challenge and was the 2nd qualifier which actually pays some money! Drivers are seeded by their margin of victory and my 2.1s margin was good enough for 2nd behind Mark Madarash's 2.2s victory. I lined up against an STF Mazda 2 in the first round was able to take the victory and move to the second round. I lined up against Chris Harvey in a C-Street MX-5 in round 2 and my cold race tires were no match for his pre-warmed Dunlop street tires (his co-driver drove right before him in the Challenge). Congrats to the Kim and David Whitener who came home with a pair of Challenge victories.

Right after the challenge, we hit the road for the 12-hour trek back to San Angelo where we arrived at 6AM....maximize racing, minimize vacation time! The crazy driving trip was worth the results we achieved in Blytheville and it was good to catch up with our autocross friends from all over the country. Next up for us was the College Station Championship Tour which I will have a recap up shortly.

Thanks to Sam Strano for his advice throughout the weekend and for helping me continue to develop the Camaro. It was good to catch up with you buddy! Visit Strano Performance Parts for your all of your autocross and muscle car needs.