Busy Day of Dirt Racing this past Saturday 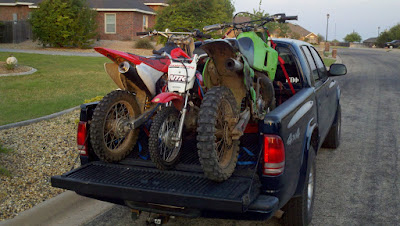 Dirt Bikes Loaded up for Texana Off-Road Ranch
Ali and I made the trek with a few friends to Blackwell, TX for the Blackwell 250 which is the first round of the Baja Racing Texas series at Texana Off-Road Ranch. I've been into Baja and off-road racing since my Baja SAE adventures in college so the chance to check out this race less than an hour from my house was too hard to pass up. We loaded up the dirt bikes in the truck, but this was futile as we weren't allowed to roam the 38 mile course without being a "crew-member" so we were confined to the large paddock area...so only the pitbike was really needed. Anyway, there were about 50 cars running the race and the start was fun to watch as all 50 cars rocketed off the line at 30s to 60s intervals. We watched for several hours and roamed the pits talking to racers and peering into crashed racecars. Before the 9 hours Blackwell 250, there was a two-hour UTV race the paddock had approximately 80 to 100 cars in it....so there were many different types of racecars to snap photos of. 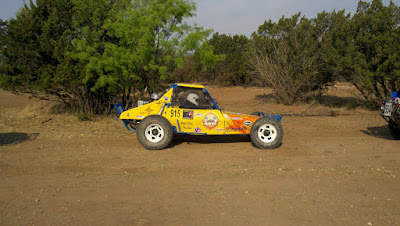 Buggy on the starting line 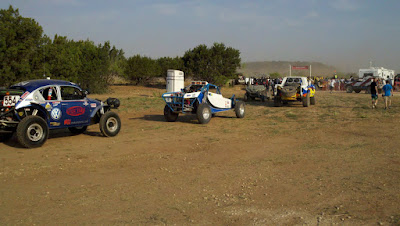 Bugs and Buggies and Trucks on the Starting Line 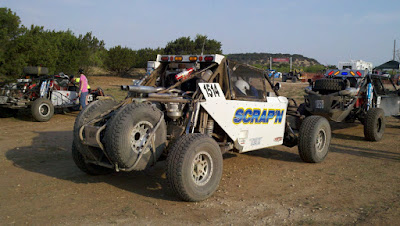 Huge "Truggie" lined up before the start 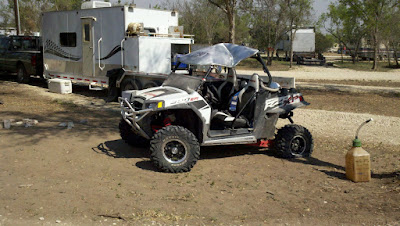 Victim from the Texana UTV Race
The most exciting part of the race was talking to several drivers who run 1989 Honda Pilot FL400s in the Formula Desert Lights class which is meant for small buggies with less than 1200cc engines that compete against the brand-new UTVs like the Polaris Razor. I need to keep investigating the rules, but there is a chance I could prep "Gnarly Garbage" my 2008 UVa Baja car to race in this class. I would need to swap in a 500cc or less 2-stroke motors and get my chassis approved...but there is a chance I could be racing my homebuilt Baja car in the Texas desert next year. Here are the class rules: Formula Desert Lights Class Rules

Here are is a video from the Blackwell 250:

We left the ranch around noon, and after a quick lunch and workout, I went to the shop and hopped into Gary's truck headed for Odessa. Gary and I left around 4PM for his Saturday night Sprint Car race in Odessa, TX. During the two-hour drive to Odessa, we saw a huge wildfire that filled the sky with white and black smoke. I later read that it has consumed over 4,000 acres and destroyed 34 homes...scary stuff. 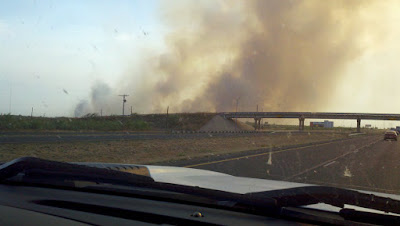 The track conditions in Odessa were pretty terrible as the temperature reached 100 degress before sunset, with 30mph winds, and a very dry dusty track. We tried some different setup options during the hot laps but we were struggling with rear grip center off. After the pill pick for the heat race, we started 6th out of 6 for the heat, but Gary made several nice passes and moved into 3rd place. After another pill pick to jumble up the top 6 for the Final, Gary drew P4 so we lined up on the 2nd row for the 20 lap final. Being his only crew-member, I bump-started him with the ATV and quickly moved to the infield to watch the 20 lap battle. The track was terribly dry and the windy conditions made the track a dust bowl. Visibility was non-existent but Gary was able to stay clean and move up to 3rd place by the checkered flag. Garry took home $250 in prize money and we got home at 3AM. 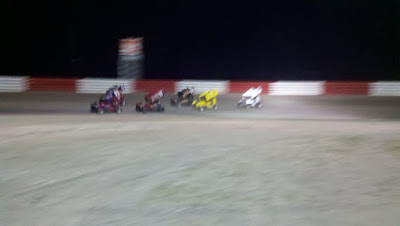 Photo from the Infield of Gary's Heat Race in Odessa
After 6 hours in the car, and watching dirt track racing from 8AM Saturday to 3AM Sunday, I was exhausted and fell asleep on the couch watching F1 live....fun Saturday.